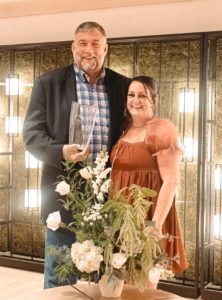 “He [Kernea] is a pillar of support in public power,” said Kelley during the award ceremony. “Like E.F. Hutton, when he speaks people listen and inevitably are rewarded by the heartfelt wisdom and guidance that he provides.”

Established in 1980 and renamed in 2004 to honor retiring TVPPA President and CEO Dick Crawford, the award honors any CEO or General Manager of a TVPPA member system who has been active in TVPPA, as well as other Valley electric utility association activities, and meets these criteria:

Kernea has worked in the utility industry for 39 years, 19 of which were spent with Murphy Electric Power Board where he has held the position of General Manager for 14 years. He joined the TVPPA Board of Directors in 2017 and has served as Secretary-Treasurer of the Board since 2020. He has provided over 10 years of service to the TVPPA Rates and Pricing Committee, and currently chairs the TVPPA Board Finance Committee.

“I really had a thought walking up to the stage that I have a strong family,” said Kernea during his acceptance speech. “I have coworkers that are amazing. I’ve been given the honor to work with people who absolutely excite me in their passion for what we do. Because of the support that I’ve been given from my family all my life, I’ve been given the gift of opportunity to provide service.”

In addition to his work as a public servant at Murphy EPB, Kernea’s contributions to the Cherokee County community stretch from bank, school and county boards to Little League baseball and softball programs.